A Series of Moves

The Eve blogoshpere has been too quiet, and I've been too busy with other things to blog, much less properly play Eve. Where did I leave off? Oh yeah.

So... I decided in the end that, since there were only three days left til my alt could fly my recon ships, I might as well move the small amount of gear I had in the wormhole into the lowsec system we were currently linked to, grab a shuttle to fly back to Evati, and have my alt fly the rest back at the earliest convenience. Moving out didn't take very long. I think if we'd had more people in the w-space and active, it might not have been so painfully dull, and we may have scored something. As it was, with only a handful of alliance members on sporadically, there wasn't much to do.

I'd left the bomber and the Arazu in the incredibly quiet(!) lowsec system our wormhole dropped me in, bought a shuttle and was partway home when I passed through the Hellcats' old main base of Vitrauze. It felt good to see the place again, and being inundated with cheerful welcome comments in Local from our old blues was even better. If only I'd not been in such a rush and decided to fly the bomber back, I could have got in on the fun they were having -- I was sad I had to turn the fleet invite down.

But it got me thinking. It'd been a while since we'd used the secondary base out in Amamake. In every corp I've been in, I was always happier if I had a secondary base to go to when I wanted a change of scenery. Why not move my stuff from Amamake back to Vit?

It took a couple days to get everything moved over, and I've spent the last couple weeks out there, saying hi to old mates an especially the Tuskers (<3 ya, guys!), Ghost Festival and Veto. The Hellcats have reopened our old office, and our other members have invitations to stick a couple ships in, as well. Once I'm back from holiday, the corp will reopen recruitment(!), using our secondary base as a place to run Hellcats-only ops from, so that we can get a sense for how well the recruits work within the corp.

Unfortunately, I've not been able to do much, since I've been working on the last chapter of Space Captain Starke (it is epic, and will be done tonight!), and spending the rest of my time trying desperately to find a job before I face deportation (my student visa expires in a month. It's not fun).

Tomorrow, when my boyfriend gets off work, we'll be catching a train across to Glasgow to spend the night, then an early-morning flight to London, and then up to Reykjavik for a week of fun and geekyness. I've been looking forward to this trip all month! Hope to see some of you up there ^_^
Posted by Ivanneth Maethor at 13:20
A Series of Moves
2009-09-27T13:20:00-04:00
Ivanneth Maethor
eve online|eve tourism|fanfest 2009|out of character|
Comments

Day... how long? I've forgot how long I've been sitting in this forsaken w-space system. Let me check my mail. Day five, I think.

Damn is this place dull.

It's pretty, mind, in a 'someone dropped a handful of oil pastels in the sink' sort of pretty. Rather bland, too, the number of cosmic anomalies is fairly low. 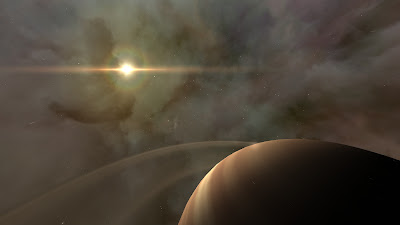 Pretty but unremarkable.
I made a safespot in warping-distance to the corp tower once I realised how awful being inside the shields is. I didn't really believe Cerys when she'd said the shields gave her a headache, but... it's true. After a bit spent sitting there, the horizontal banding and the way it wavered started to make my temples pound.

This may be the longest I've ever spent continuously in a ship. I can't particularly recommend it -- a stealth bomber is not the best of places to be stuck with four crewmembers who also only want to get home. Privacy is minimal, and thank fuck the air scrubbers were just serviced; as it is, we're begining to get a bit snappy. It's crazy that, while craving each other's company, we drive each other mad just by all being stressed and lonely.

To distract myself, I chat to people in various channels and scan around looking for... well, anything. After three days of that, I was clawing at the walls of this spacious prison I've come to think of as Scar (for the red-edged black gap in the otherwise fairytale nebula). It was so quiet, so... empty. 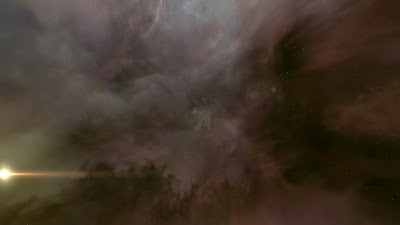 Scar's scar.
I spent most of today probing around. We've had a few visitors from other wormholes that have opened into Scar -- a Vagabond and Navy Caracal the other night, a couple different people in cov-ops ships today. Nobody sticks around long. Every wormhole I find, I bookmark, hop through for a peek to see where it leads, bookmark and scan, then go back through. The bookmarks are all placed in a can so that others in the alliance can grab copies.

Today was the best I've seen since joining Mynx in here. Wormhole number one led to Caldari lowsec. Number two led to a class-2 wormhole system which was dark, unimpressive and had signs of occupation. Number three... oh, number three. The entrance to the second w-space system was opened sometime during the day by one of its occupants. I think I fell in love with the system the moment I saw it.

Blue-green nebula. Red giant star. Yeah, red giant. I've never seen a red giant system before, probably because the physics which makes stargates function makes those systems impossible to link to the network. I couldn't get enough of looking at the place, flitting from planet to moon to planet, discovering the quite well-fitted tower the occupants had put up. 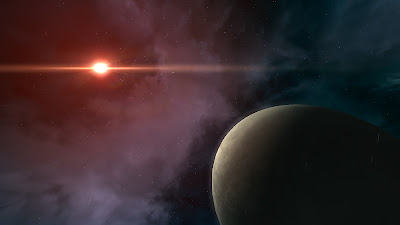 Wow.
I scanned around a bit, hoping to find any more wormholes which led to k-space, but they mostly only had asteroid belts. I hung around a bit longer, taking picures and marvelling at the site before reluctantly deciding it was time to go back. 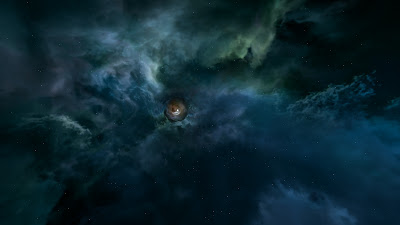 Do I really have to go back?
The only reason I didn't decide to ride the spatial disturbance current was that my other ships were still in the corp hangar back at the tower in Scar. I'm hoping to find an exit close to Evati so I can move all my gear back out in one go. For all the wonders out here in unknown space... there's not enough to entice me to make a permanent move. 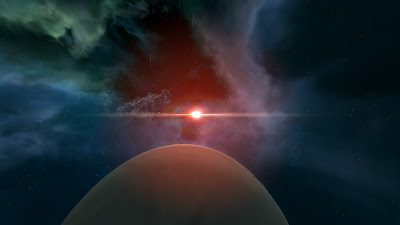