I paced the docking-ring below as the hangar techs installed the turrets I'd ordered. They looked odd: brushed silver tritanium alloy flecked with glowing sea-green against the darker hull and golden running lights. It wasn't a Gallentean design; the organic lines had a more menacing aspect and the systems' low resting hum had more in common with a thoughtful bee than the contented purr I was accustomed to.

Roc Weiler had given the ship to me ages ago, back when I think he was trying to tame the wild women of the Hellcats into a faction-fighting force. Like that was going to work. This particular hull had sat in a hangar in highsec for months, waiting for me to decide the time was right to have her brought in and used for her proper purpose: to fuck people's shit up.

It amused me a bit, to know the ship Roc had wanted me to fly securing Minmatar compounds would instead be used for what she was intended. The Daredevil was not designed by the Serpentis to be a peacekeeper: she was a pirate through and through, hull to core, and it would be disrespectful to treat her as anything else. 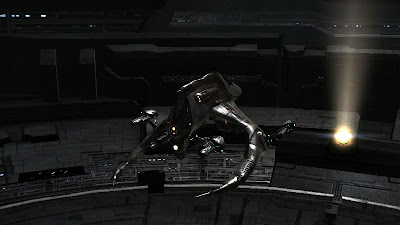