(I originally posted this on Google+, before I realised it was more of a blog post than a G+ entry.)

I ran across yet another article about how people objected to the romantic interactions that occur in Dragon Age 2. The Straight Male Gamer complains there's not enough content for his demographic; the Gay Male Gamer complains about the portrayal of a bisexual (yes, he's bi, not gay; go play Dragon Age: Awakening, it's mentioned in there) character. 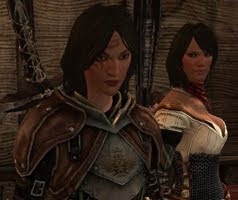 To those who have complained, I say this, as a Bi Female Gamer: try playing the game with a female Hawke. Anders comes on to you no matter who your character is, and his response upon rejection is the same; Isabela comes on to your character regardless of their gender, as well. "Oh, but that's the stereotype of a gay man! Perpetually horny and unable to accept rejection by a straight male!" Not every LGB person is an uncontrolled hornball. Most straight folk will look at you like you've come from another planet if you suggest that they don't like sex as much as the next guy or girl.

And how do you feel when your crush rebuffs your honest advances? Embarrassed, ashamed, maybe a little upset? In a game where a party character makes the first move, a bit of a drop in their estimation of you upon rejection is wholly understandable.

It's tough to write believable, human characters, particularly for a game, where the writer has minimal control over how the player chooses to interact with the NPCs. Despite my feelings that DA2 skimped on a lot and failed to meet its potential, one thing it does have is very good writing, and the characters are portrayed well. They have depth, fragility, strength, and their own motivations that don't always coincide with Hawke's. What a relief to not have deadweight shop-mannequins to drag around!

It genuinely amuses me to see the (Bigoted) Straight Male Gamer contingent complaining about a topic that the Female Gamer contingent recognises is SO tired that it's not even worth mentioning anymore. How many women gamers have complained about Isabela's design and portrayal? But now the tables are turned: instead of a woman gamer with a female character being approached by busty, lusty female characters designed to appeal to the Straight Male audience -- I'm looking at you, Mass Effect -- it's the guy's turn for their male characters to be hit on by a lusty male companion. Heaven forbid!

The gender ratio of gamers these days is an estimated 40/60 female to male split. I'll assume trans gamers go on the record as the gender they identify with for surveys like that. Let's assume that 10-20% of the male player-base falls somewhere on the pansexual spectrum. By marketing and designing solely to the majority (the Straight Male Gamer), companies can easily be neglecting 50-60% of their potential player-base; the women and LGB gamers will be passed over in favour of that 40-50% of Straight Male Gamers who have already been marketed to for decades.

Here's a suggestion: let's stop with the social divisions. In this day and age, if you want to market a game to as many people as possible, you can't think in terms of Male and Female, Straight and Bi and Gay. This is one place where I feel DA2 really hit it spot-on: all your available romances are bisexual -- that is, it doesn't matter to them what gender Hawke is, they will respond to you the same. Nearly every character in the game responds to you the same way regardless of Hawke's gender (with the exception of a few particularly drunken and/or horny individuals). And the portrayal of your player character is perfect: not overly feminine or masculine, you're simply a person. It's the ultimate freedom of choice which enables the player to make what they want of who their character is.

David Gaider was, I feel, in the right in his assertion they they couldn't just write the game for only Straight Male Gamers.

Suppose we change things up a bit. Let's say there's ONLY ONE demographic to please: the sort of game-player of a given age who is interested in a certain topic. Dragon Age caters to adults who enjoy a solid hack'n'slash fantasy epic where they get to play the hero. When you're trying to build that vital core of dedicated fans, are you going to care what their gender or sexual orientation are?

Stop the bias: create games for PEOPLE.
Posted by Ivanneth Maethor at 01:55